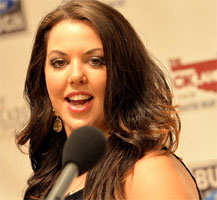 Norman, Oklahoma-born country singer Krystal Keith (born Krystal Ladawn Covel Sandubrae), the daughter of country singer Toby Keith, grew up with country music in her blood and began singing as a child, making her chart debut in 2004 when she sang a duet with her father on a cover of Inez & Charlie Foxx's "Mockingbird." After graduating from the University of Oklahoma, she went into the family business, signing to her father's Show Dog-Universal Music imprint in 2013 and releasing a self-titled debut EP, which included the single "Daddy Dance with Me." Keith's full-length debut album, Whiskey & Lace, arrived in December of 2013. Featuring co-production from her father, along with Mark Wright and Nathan Chapman, Whiskey & Lace also featured three songs penned by Keith.