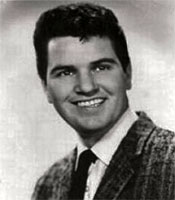 Born 1937, Jordon Plantation (70m from Monroe), Louisiana, USA, dead 9 November 1992, Oakland, California, USA. In the early 50s Key became interested in blues after hearing a record by Lightnin’ Hopkins and he began playing guitar following a serious illness that resulted in hospitalization. During this time he was greatly influenced by the records of Fats Domino, Johnny Otis, Muddy Waters, and others. He was signed by Warner Brothers Records in 1958 and had three singles released. Key teamed up with J.J. Malone in 1961 and they recorded together around three years later; they also had two albums released by Red Lightnin’ and enjoyed a near-hit in Britain in 1980 with the single ‘I Gotta New Car (I Was Framed)’. He continued, until his death from leukaemia, to present his good-natured, rocking blues in Oakland, California, at his own club called Eli Mile High, which was also the name of his blues record label.