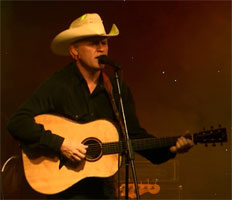 Jerry Kilgore grew up in Tillamook, OR, and developed an interest in country music by listening to his family's Merle Haggard and Buck Owens records. He took up the guitar as a teenager but didn't form his first band until the age of 20, when he began playing in a honky tonk one in Portland. After a couple of years, he moved to Mesa, AZ, and played in a club there five nights a week for three years, then moved to North Carolina and fronted a honky tonk band for two more years before deciding to try his luck in Nashville. His breakthrough came when "Love Lessons," a song he had co-written, peaked in the country Top Ten for Tracy Byrd in December 1995. John Michael Montgomery took his song "Cover You in Kisses" into the country Top Ten in 1998. In January 1999, he became the first male artist signed to the newly formed Nashville division of Virgin Records. His debut single, "Love Trip," came out in the summer of 1999 and made the country charts, followed in September by a debut album of the same name.