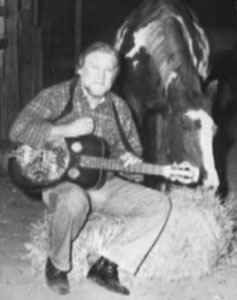 Born in 1926, on a cotton farm near Florence, Alabama, USA. He was attracted to country music by recordings he heard as a child, first by the Carter Family and then in the late 30s, the recordings of Roy Acuff. He was particularly drawn to the sound of the dobro on Acuff’s recordings and was totally impressed by the playing of Pete Kirby. During service in the US Navy during World War II, Kimbrough met Kirby and bought one of his old dobro guitars. He recalled years later that ‘By the time I got it, it was the most beat up dobro you ever saw but it still had the sound and I was the happiest person in the world’. After the war, Kimbrough returned to the farm and although he never became a full time musician, he played and sang with various groups. A dedicated traditionalist, his Vocals work was reminiscent of Acuff’s. He also wrote many songs such as the biographical ‘Sundown At Our Old Home Place’ and dobro instrumentals but did not record until 1973. During the 80s, he formed his own Kimbro Records and also had releases on Cattle, a German label.