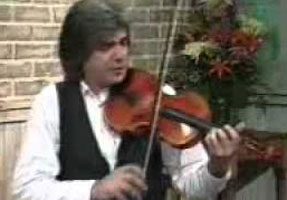 Kenny Kosek, born in 1949 in The Bronx, New York, is an American fiddler who plays bluegrass, country, klezmer, folk music and roots music. In addition to his solo career, he has performed with many other well-known performers and contributed to film and television soundtrack music. He is also a musical educator. Beyond the field of music, he is also known for his humor. He is a graduate of Bronx High School of Science and City University of New York.
Kenny Kosek's early musical influences included Clark Kessinger, Vassar Clements, The New Lost City Ramblers, Kenny Baker and the May Brothers - Andy and Henry. While attending college, he played with The Star Spangled String Band and The Livingstone Cowboys, and freelanced in the Bleecker Street folk scene. His first post-collegiate professional work was as a member of the David Bromberg Band, and with a short-lived rock band, White Cloud, led by legendary hipster producer Thomas Jefferson Kaye. Along with Citizen Kafka and John Goodman, Kosek wrote for and performed in the Citizen Kafka Show, an improv and sketch comedy show that ran on WBAI-FM in New York City through the 1980s.
Kosek has played backup on hundreds of albums, soundtracks, and jingles. He has recorded with James Taylor, Jerry Garcia, David Byrne, Chaka Kahn, Willie Nelson, Steve Goodman, Tom Chapin, Tony Trischka, David Bromberg, Bill Keith, Doug Sahm, Leonard Cohen, and John Denver and performed with the Late Night Band on Late Night with David Letterman. His distinctive roots-music-inspired sound has been part of the soundtracks of many documentaries including The Way West, The Donner Party, Harlan County, U.S.A., The High Lonesome Sound, and the television shows Another World (NBC), The Guiding Light (CBS), and The Kirby Kids
Kosek is deeply involved with music education. His musical instruction videos Learning Country Fiddle, Learning Bluegrass Fiddle, and Bluegrass Classics are available from Homespun Tapes and Videos. He has been a guest instructor at the Falun Folk Festival, Sweden, Tonder, Denmark Festival, the Sore Fingers Music camp, Cotswolds, England, the Big Apple Bluegrass Festival (1998–2002), and the Rathcoole, Ireland Folk Arts Festival (2004). He is a staff instructor in country fiddle at the Turtle Bay Music School in New York City.
In addition to performing music, Kosek has appeared in many dramatic productions: in the movies They All Laughed and The Stepford Wives; on Broadway, in The Robber Bridegroom, Platinum, Play Me A Country Song, Foxfire, Big River, Jerry Garcia on Broadway and Footloose; and off-Broadway, in Feast Here Tonight, Das Barbecü, That and the Cup of Tea, A Celtic Christmas, Lost Highway, and Picon Pie.