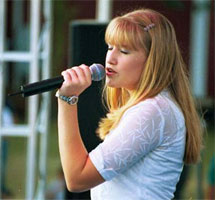 Another teenage female country star to join the ranks of LeAnn Rimes, Lila McCann debuted singing "You Are My Sunshine" with her father's country band at the tender age of four. Influenced by Reba McEntire and the Judds (though she also listened to No Doubt and Boyz II Men), McCann began performing regularly several years after her debut, balancing her education in small-town Washington with shows at local Eagle's Lodges and bars. While just a freshman at Steilacoom High School, she was given a demo of the song "Down Came a Blackbird" by her new manager, Kasey Walker. The song so impressed Elektra Records president and longtime industry insider Seymour Stein that he signed McCann to Elektra/Asylum. After working with producer Mark Spiro (also the writer of "Down Came a Blackbird"), McCann released her debut album, Lila, in June 1997. Though the album's maturity was quite remarkable, it failed to break into the Top 40 album charts but did go gold. Something in the Air followed in 1999. Complete appeared in spring 2001.