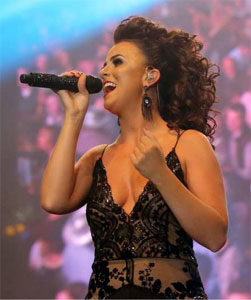 Lisa McHugh spearheaded the Irish-and-country renaissance of the 2010s alongside artists like Nathan Carter and Derek Ryan. With its twee and fusty image, homegrown Celtic country music had long been the preserve of an older generation of Scots and Irish, but these sexy young stars rejuvenated the genre and brought it back into the charts. Born in Glasgow, Scotland to Irish parents and brought up in the small village of Carmunnock on the outskirts of the city, McHugh grew up on her parents' beloved country music and soon became a fan herself. Childhood trips to Ireland cemented her love of the genre and she continued to follow it into her teens, despite its unfashionability. A keen singer, she learned to play guitar and studied music at school.
After a few years working in her father's construction business, she decided to take a punt at becoming a singer herself, and in 2009, at the age of 21, she took part in Irish TV's country music talent show Glór Tíre ("Country Voice"), where she reached the final. Her success gave her a huge confidence boost and the following year she moved to her mother's home county of Donegal, where she hooked up with promoter Ray McLoughlin, formed a band, and began performing. Blessed with a rich, sweet voice, wholesome good looks, and a warm, friendly personality, McHugh soon became a bona fide star. In 2012, she released her debut album Dreams Come to Life, which saw her named Female Singer of the Year by the Irish World. That year she got the opportunity of a lifetime when Gene Watson asked her to sing on his latest album. He took her to record in Nashville, where she performed with him at the Grand Ole Opry.
Later she moved to Enniskillen, within easy reach of both Belfast and Dublin, at around the same time as Nathan Carter, with whom she had become good friends; the two were briefly "romantically linked." In 2014, she released her second album, A Life That's Good, featuring the singles "Applejack" and "Hillbilly Girl," and was awarded her own TV show, On the Road with Lisa, which brought her to an even bigger audience. In 2015, she was invited back to Glór Tíre, this time as a mentor. Her third album, Wildfire, dropped that year, followed by #Country in 2016.