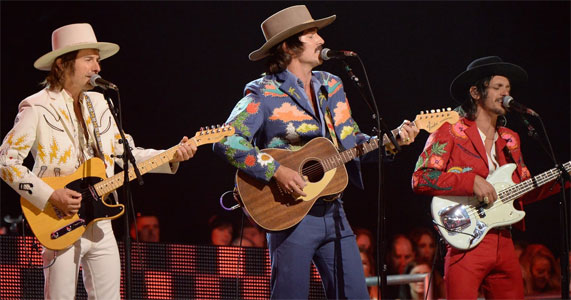 Texan trio Midland fuse elements of smooth '80s country and wistful '70s classic rock with a tuneful pop sensibility. The band formed out of a series of picking sessions at bassist Cameron Duddy's wedding in Jackson Hole, Wyoming when he, singer Mark Wystrach, and guitarist Jess Carson discovered an immediate musical chemistry. Taking inspiration from the Eagles, Dwight Yoakam, George Strait, and Gary Stewart, the three friends relocated to Texas and recorded a series of tracks at Sonic Ranch Studios that eventually led to a deal with Nashville titans Big Machine Records. Making their label debut in 2016 with a self-titled EP, Midland showcased their warm, harmonic blend and hook-filled songwriting on songs like "Drinkin' Problem" and "Burn Out." The full-length On the Rocks, featuring several songs from the EP, appeared in September 2017.  It made it into the Top 20 of the Billboard 200 and hit number one on the Top Country Albums chart.