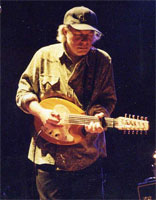 Soulful Americana songwriter, singer, and producer Buddy Miller began his career in the early '60s as an upright bassist is high-school bluegrass combos. Later, he traveled the backroads of America as an acoustic guitarist, eventually landing in New York City, where his Buddy Miller Band included a young Shawn Colvin on Vocalss and guitar. He also forged an enduring relationship with country-rock iconoclast Jim Lauderdale. Miller eventually landed in Nashville, where he did session guitar and Vocals work on albums by Lauderdale, Victoria Williams, and Heather Myles, among others. He self-produced his criminally overlooked solo debut, Your Love and Other Lies (Hightone, 1995), and followed it with 1997's equally superb Poison Love.
By this point Miller was the lead guitarist in Emmylou Harris' road band (and also her side project Spyboy), and Harris returned the favor with backing Vocalss throughout Poison Love. Released in 1999, Cruel Moon continued Miller's string of home-recorded masterpieces; this time around, Steve Earle dropped by for the sessions. Consistent highlights of Miller's recordings were the songwriting and harmonies of his wife, Julie Miller, whose work was often produced by her spouse. The 2001 duet album Buddy & Julie Miller brought her contributions to the front of the mix and delivered them with gritty, soulful country arrangements enhanced by the interplay of his scowl and her lilt. The year 2002 saw the release of Buddy's fifth album for Hightone, Midnight and Lonesome, which once again featured contributions from Julie, Harris, and Lauderdale as they mixed honky tonk with heartfelt balladry and the occasional soul cover. In 2004 Miller released the rootsy gospel album Universal United House of Prayer for New West; production assignments and studio gigs kept Miller well occupied until he could complete his next solo set, 2009's Written in Chalk.
Miller emerged as a recording artist again with 2011's The Majestic Silver Strings, a re-imagining of classic country songs with some originals tossed into the mix. To help realize the project, Miller enlisted guitarists Marc Ribot, Bill Frisell, and Greg Leisz, and a rhythm section comprising bassist Dennis Crouch and drummer Jay Bellerose. Produced by Miller, the guitar army was augmented by Vocalsists Julie Miller and Emmylou Harris as well as Patty Griffin, Shawn Colvin, Chocolate Genius, and Ann McCrary. Miller teamed with longtime friend and fellow singer and songwriter Lauderdale for 2012's Buddy & Jim, released by New West Records. In 2013, Miller added a new skill to his résumé when he became an executive music producer for the hit TV series Nashville, helping to coordinate the music featured each week in the show set in the country music capital. In 2016, Miller released Cayamo Sessions at Sea, featuring material recorded with Miller and a host of guest artists (among them Lucinda Williams, Lee Ann Womack, Kacey Musgraves, Richard Thompson, and Kris Kristofferson) during the annual roots music cruise.