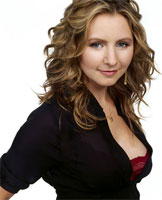 Actress/Vocalsist Beverley Mitchell is best known for her role as Lucy Camden on the WB series 7th Heaven. Born in 1981, Mitchell first began acting as a child on the series Big Brother Jake in the early '90s. Prior to 7th Heaven, the California native also appeared in the film The Crow: City of Angels in 1996. Since that time, she has appeared in various made-for-TV movies, including the Sinatra mini-series, as well as appeared in the horror film Saw 2 in 2005. A fan of country music, Mitchell worked on her debut album in Nashville when not filming 7th Heaven. Eponymously titled Beverley Mitchell, the album was released on Daywind in 2007.