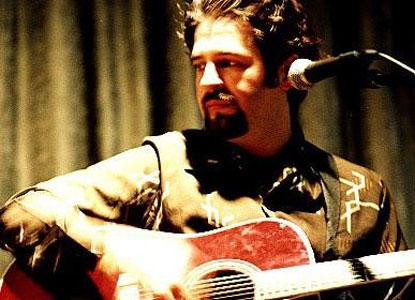 Nashville, New York, and Los Angeles all figure prominently into the musical landscapes that singer/songwriter Kevin Montgomery paints with his high lonesome voice and heartfelt lyrics. As the child of Buddy Holly's musical partner and Elvis Presley's backup singer, Montgomery had little choice in the matter of his musicality. With that bloodline, the nature angle is covered pretty well. As for the nurture side, growing up in Nashville set the rootsy Americana sound as the basis of Montgomery's work, while busking in subways adds New York's sly, street-smart sensibilities to the mix. The wide-open, sun-filled skies of Los Angeles top it all off with an optimism and melodicism reminiscent of Jackson Browne.
Montgomery made a strong debut in 1993 with Fear Nothing on A&M Records. It showcased a young talent with obvious potential, earned him slots fronting for labelmate Sheryl Crow and David Crosby, and garnered limited airplay on Triple-A radio. With that foundation, Montgomery bounced around for several years before departing A&M. He got himself onto a number of compilation discs, including the Buddy Holly tribute Not Fade Away where he duets with Mary Chapin Carpenter. Montgomery also took some time to collaborate with folks like Lee Ann Womack, Cindy Alexander, Rodney Crowell, and Anna Wilson. Both Martina McBride and Juice Newton sought out Montgomery's tunes to cover. In 2000, Another Long Story came to light in the U.K. and Europe. A great collection of Montgomery's strongest work yet, it caught Paul McCartney's ear and got Montgomery invited to perform at the former Beatles' annual Buddy Holly birthday event in London. His popularity overseas has been further proven by the numerous television performances and sold-out concerts enjoyed on every visit. To capture the feel of his acoustic European shows, Montgomery recorded Kevin Montgomery Live at Nashville's legendary Bluebird Café in 2001. Also released in 2001 was the EP Paint which features a duet with Trisha Yearwood on the aptly titled "Tennessee Girl." That track was chosen by the BBC as their lead-in to the CMA Awards.