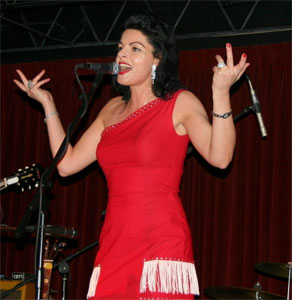 Dutch Rockabilly Singer, Sue Moreno was raised in a home full of music.
At age 15, she was singing in her first band. A few years later she was performing on America’s Eastcoast. After her return to homeland the Netherlands she started working as a background singer and formed her band Susan When She Tried.
Sue obtained her master degrees in film and tv studies -acting, directing and writing and in 1997, she became succesfull with her band Sue and the Flaming Stars.
Her position in the world of music is well-deserved. She has been performing on many stages all over Europe and America.
She worked with great legends and artists like Paul Burlinson, Rocky Burnette, Stan Perkins and The Comets and todays rockers like Number Nine, the Barnshakers, the Hacienda Brothers and Darrel Higham.
She released a solo album in 2002 and one with her Flaming Stars in 2004 and can be found on a bunch of compilation albums. Late 2005 the succesfull collaboration with Marco Di Maggio resulted in the release of the album Bye Bye Blues.
Sue attributed to the Jack Million Big Band album ‘Night and Day’ (2005) that ended in the top ten hitlist in South Africa.
She starred as a singer and dancer in various theatre shows and has been working on various film and acting projects.
In 2004-2005 Sue has been singing at the Elvis-gospel services throughout the Netherlands. She has much coverage on radio and TV and appeared on many festivals like the Shake Rattle and Roll Weekender, the Jackson Rockabilly Fest, Viva Las Vegas, Green Bay rock ‘n roll weekender, the Midsummer Jamboree and the Screamin’ Festival.
In 2007 Sue toured the state of Texas, USA, with the Horton Brothers.