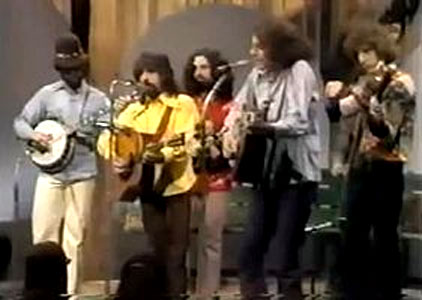 Muleskinner was perhaps the one and only bluegrass supergroup. Composed of David Grisman, Clarence White, Peter Rowan, Richard Greene, and Bill Keith, the group formed as a favor to a California public television station looking for someone to perform on a show with Bill Monroe's Bluegrass Boys. The choice of musicians was perfect for all had began their careers with bluegrass bands (Rowan, Greene, and Keith with Bill Monroe's band; Clarence White with the Kentucky Colonels; and Grisman with the New York Ramblers) and all had gone on to find success and respect in the industry (White with the Byrds; Grisman and Rowan with Earth Opera). Their appearance on the show was so successful that the band was offered a one album deal with Warner Brothers. The subsequent soundtrack to the TV special, an instant hit among bluegrass fans for its mastery of the idiom, has been re-issued several times throughout the ‘80s and ‘90s. With the exception of White, who died tragically in an auto accident, the members have reunited from time to time for one-off performances.