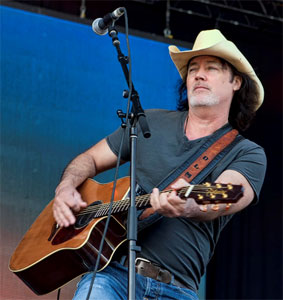 David Lee Murphy's polished blend of neo-traditional country and mainstream rock flourishes made the Vocalsist a star in the mid-'90s. Murphy moved to Nashville with hopes of become a star in 1983. For ten years he struggled in the Music City, honing his craft but never catching the attention of the music industry. By the early '90s, he had gained a reputation in Nashville and in 1992 signed with MCA Records. Murphy's first recording was a contribution to the soundtrack of the Luke Perry rodeo movie Eight Seconds.
Out With a Bang, his first album, was released in early 1995. "Party Crowd" became the most-played song on country radio in 1995, and the record's second single, "Dust on the Bottle," spent two weeks at number one. Out With a Bang would go platinum become the best-selling debut album by a male country single for the entire year of 1995. The Academy of Country Music nominated him for Top New Male Vocalsist at the end of the year.
Released in the summer of 1996, his second album, Gettin' Out the Good Stuff, wasn't quite as successful, although the single "The Road You Leave Behind" reached number 14.