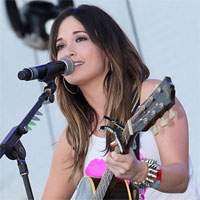 At the outset of her career, Kacey Musgraves bent country tradition to her will, writing songs that evoked the sound of classic country but were infused with progressive ideas that reflected her millennial perspective. "Merry Go Round" and "Follow Your Hits," the big singles from her 2013 major-label debut, Same Trailer Different Park, crystallized this gift and helped establish Musgraves as a major voice in country music: she was the rare country singer who could cross over to a rock audience without playing pop. By the end of the decade, she expanded her musical horizons so they mirrored her expansive lyrical stance, a shift showcased on her 2018 album, Golden Hour.
Born and raised in the East Texas town of Golden, Kacey Musgraves began writing songs when she was just eight years old, not long after she picked up a mandolin. By 12, she knew how to play guitar and began to write her own songs, teaming with Alina Tatum as Texas Two Bits for a self-released album called Little Bit of Texas in 2000. Throughout her adolescence, she'd write, sing, and play, performing at local festivals on occasion and releasing a series of independent albums -- Movin' On (2002), Wanted: One Good Cowboy(2003), and Kacey Musgraves (2007) -- along the way.
After graduating high school, Musgraves moved to Austin, where she would sing on songwriting demos while working on music of her own. She also took a stab at the televised musical competition Nashville Star, appearing on the fifth installment of the CMT series; she was eliminated four weeks into the season, placing seventh overall. Her appearance, along with her independent recordings, eventually attracted the attention of major labels, and she signed with Mercury Nashville in 2012. By the end of the year, she had supported Lady Antebellum on tour and released a debut single, "Merry Go Round." In March 2013, "Merry Go Round" peaked at number ten on Billboard's Country Airplay chart, setting up the release of her full-length debut, Same Trailer Different Park -- which also arrived that March -- quite nicely.
Produced by Shane McAnally, Luke Laird, and Musgraves, Same Trailer Different Park debuted at number two on Billboard's Top 200, earned positive reviews, and spawned two additional hit singles, "Blowin' Smoke" and "Follow Your Arrow," on its way to a gold certification. The album also snagged the Academy of Country Music Award for Album of the Year. The success of Same Trailer Different Park helped position Musgraves as one of the hottest stars in country music, raising expectations for her second album, Pageant Material. Arriving in June of 2013, the album debuted at three on the Top 200 but the record stalled out on the country charts; its lead single, "Biscuits," peaked at 41 on the Country Airplay chart, and "Dime Store Cowgirl" never made that chart.
Musgraves released the cheerfully retro A Very Kacey Christmas in October of 2016, then set to work on her third album of original material in 2017. Produced by Daniel Tashian and Ian Fitchuk, 2018's Golden Hour boasted a sleek, modern sheen that sounded more contemporary than either of its predecessors.