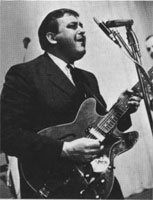 Mathias Nicholas Nastos was one of Bill Haley's guitar player. He recorded himself in the early 60's ("Bulldoggin' the steel") then joined The Comets in 1964 for a short while. In '65 he formed his own band, Nick Nantos & The Fireballers, and recorded an LP with instrumentals ("Guitars On Fire"). Back in Haley's Comets in the late 60's, he became the lead guitar player of the band and was occasionally on Vocals, like on this great version of "Whole Lotta Shakin' Goin' On" recorded live in Sweden in 1971. He was the father of country folk singer Sia LaBelle.

* Although credited to Jack Howard, these tracks were in fact instrumentals by Nick Nastos (aka Nick Masters).