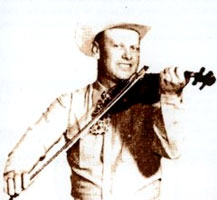 Hoyle Nix, West Texas fiddler, bandleader, and exponent of the Bob Wills sound, was born to Jonah Lafayette Nix and Myrtle May (Brooks) Nix on March 22, 1918, in Azel, Texas. The family moved to Big Spring when Hoyle was one year old. His father was a fiddler and his mother a guitarist, and the couple often performed together at community gatherings. Nix was six years old when he learned his first fiddle tune. In addition to his parents' influence, the music of Bob Wills was also very important to his style. According to Nix, Wills was the finest fiddler he ever heard.
Nix and his brother Ben formed the West Texas Cowboys in 1946 and patterned the band after Wills's Texas Playboys. In 1954 the Nix brothers built a small dance hall on the Snyder highway just outside of Big Spring and named it the Stampede. Nix had already established a dance circuit in the area and was making regular appearances in other towns, including Abilene, Lubbock, Midland, Odessa, and San Angelo. The West Texas Cowboys cut their first recordings in 1949 for the Dallas-based Star Talent label. The initial Star Talent release, Nix's "Big Ball's in Cowtown," a folk-derived rewrite, proved to be an enduring standard. He continued to record for small Texas record companies—Queen, Caprock, Bo-Kay, and Winston—in the 1950s and early 1960s. In 1968 Nix started his own label, Stampede, named after the dance hall.
During the late 1950s, the West Texas Cowboys grew to its largest size with nine members. The band at this time included former Texas Playboys Eldon Shamblin, Millard Kelso, and Louis Tierney. Nix had first shared a stage with Bob Wills in 1952 in Colorado City, Texas, and their two bands soon began touring together, splitting the playing time at each dance. After Wills disbanded the Texas Playboys in the early 1960s, he continued to appear with Nix on a fairly regular basis until his first stroke in 1969. The respect that Wills had for Nix was evidenced when he invited Nix and his son Jody to participate in what turned out to be Wills's final recording session, For the Last Time, in 1973.
Nix's last recordings were made in 1977 and released on Oil Patch. He was inducted into the Nebraska Country Music Hall of Fame in 1984, the Colorado Country Music Hall of Fame in 1985, the Texas Western Swing Hall of Fame in 1991, and the Western Swing Hall of Fame in 1991. He died after a short illness on August 21, 1985, in Big Spring, Texas.
Nix married five times and had four children, Larry (1940), Jody (1952), Hoylene (1957), and Robin (1959). Larry joined his father's band in 1957 and played bass. When Jody signed on in 1960 as drummer and fiddler, the two siblings became the rhythm section of the West Texas Cowboys, a position they held for the next twenty-five years. Jody Nix took over leadership of the band as his father wanted, and with the younger Nix carrying on the show, Texans were assured of dancing to the music of a Nix fiddle well into the twenty-first century.