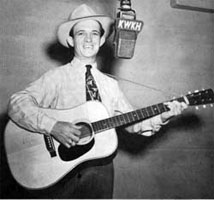 US Country singer born James Osborne, Jr., April 8, 1923 in Winchester (Kentucky). Jimmie Osborne, who billed himself as the "Kentucky Folk Singer," ranked as one of the more traditional Country singers who achieved popularity in the decade following WWII. More than any other Vocalsist of his time, Osborne (and perhaps Red River Dave McEnery) took the topical ballad into the modern era with his hit The Death Of Little Kathy Fiscus and several moderate successes about the Korean War. A native of Winchester in the bluegrass country of Kentucky, Osborne came from a farm background. When he received a guitar as a gift, the youngster became determined to carve out a musical career. About 1939 he began to appear on WLAP radio in nearby Lexington. During the war, Jimmie worked in defense plants but still played music on weekends. About 1945, he went back to WLAP and later sang at stations in Asheville and Texarkana. He came to KWKH Shreveport in 1947 and was a featured Vocalsist with the Bailes Brothers. He became quite popular and signed with King Records. His initial release, a Bailes song titled My Heart Echoes, made the Top 10 and helped land him a position back in his home state as performer and deejay at WLEX Lexington. In April 1949, Jimmie wrote and recorded The Death Of Little Kathy Fiscus about the tragic accidental death of a child in San Marino, California. It shot up to the Top 10 and became his biggest seller. In June 1950, the outbreak of the Korean conflict provided another opportunity for Osborne’s zest for topical material: God Please Protect America, The Voice Of Free America, Thank God For Victory In Korea, The Korean Story, My Prodigal Song, and A Tribute To Robert A. Taft. Some Osborne songs, like A Million People Have Died, which expresses sorrow and warning about increasing numbers of fatal highway accidents, dealt with contemporary society while others concerned traditional, romantic themes. Osborne moved to Louisville in 1952, where he opened a record shop and had a popular deejay show at WKLO. Jimmie Logsdon, a contemporary, describes him as extremely popular and well liked by fans in addition to being an excellent salesman. He went over to smaller station WGRC for a time, but had an agreement to return to WKLO when he evidently made the decision to end his life. He had a despondent side, which apparently contributed to his fateful suicide late in 1957. He had continued recording with King through May 1955, leaving a legacy of 66 songs. Many of his recordings appeared on albums released by King in the 60’s and the Dutch firm, Strictly Country, re-issued 15 of his other singles on an album in 1988.