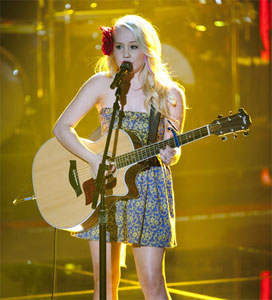 Born Racheal Lynn Woodward on May 4, 1994 in Baytown, Texas, country singer and songwriter RaeLynn came to the public's attention when she finished third on the second season of the television show The Voice in 2012. Born into a musical family (her brother Jake is a member of the Grammy-nominated band Leeland), RaeLynn first sang at church, but she discovered country music when she was 11 years old. She auditioned for The Voice for that second season, ending up on Blake Shelton's team, and eventually finished third in the overall results. The exposure did her well, and she signed a publishing deal with Dr. Luke's Prescription Songs and a recording deal with Republic Nashville. A single, "Boyfriend," was released that same year, and it climbed as high as number 32 on the Billboard country chart in 2012. A follow-up single, "God Made Girls," was released at the start of summer in 2014, this time reaching number seven on the country chart. Both songs later appeared on her Me EP, which was released by the Big Machine group's Valory Music Co. in early 2015. With her debut album already recorded, RaeLynn split with Valory the following summer and signed with Warner's Nashville arm, which issued the album WildHorse in March 2017.