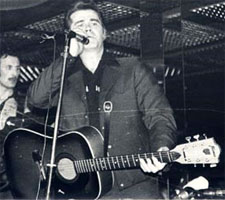 More than a few early rockabilly rebels went on to careers as country singers, but few made the jump quite as gracefully as Warren Smith. Smith earned the ultimate rockabilly seal of approval, a contract with Sun Records, and he cut a number of memorable sides for the label, but in the early 1960s, he also enjoyed a brief but memorable run on the country charts after signing with Liberty Records. Warren Smith was born in Humphreys County, Mississippi, on February 7, 1932. His parents divorced when he was very young, and he spent most of his childhood with his grandparents in Louise, Mississippi. Smith grew up with a love of music, and while serving in the United States Air Force, he taught himself to play guitar during his time off the base in San Antonio, Texas. Once he received his discharge, Smith focused his energies on a career in music, and he began playing dancehalls and honky tonks throughout the South. He landed a regular gig at the Cotton Club, a nightspot in West Memphis, Arkansas, when he was spotted by Stan Kessler, who played steel guitar with another act that frequented the Cotton Club's stage, the Snearly Ranch Boys. Kessler was impressed by Smith's voice, and arranged an audition with Sam Phillips, the proprietor of a small Tennessee label called Sun Records. Phillips agreed with Kessler's assessment of Smith's talent, and on February 5, 1956, Smith cut his first single, "Rock & Roll Ruby" b/w "I'd Rather Be Safe Than Sorry." While the flipside was a straight-ahead country tune, the A-side was a feisty rocker, given to Smith by Johnny Cash (who claimed to have bought the tune from George Jones for a mere $40.00). "Rock & Roll Ruby" turned out to be a significant regional hit, and Smith followed it with a number of classic tunes, including "Ubangi Stomp," "Red Cadillac and a Black Moustache," "Uranium Rock," and "So Long, I'm Gone." The latter tune, penned by Roy Orbison, proved to be Smith's most successful Sun release, eventually reaching 74 on the Billboard singles charts. However, though Smith consistently cut fine records for Sun, his rich voice (and his country-leaning vocal style) didn't make him sound like a teenage idol, and Phillips seemed unsure of how to promote him. In 1959, Smith's deal with Sun ran out, and he moved to California. While Johnny Cash offered Smith a spot with his touring show, he was determined to make it on his own, and in 1960, he struck a deal with Liberty Records. Smith's first release for Liberty, an excellent honky tonk number called "I Don't Believe I'll Fall in Love Today," was an immediate success, rising to number five on Billboard's country charts, and the follow-up, "Odds and Ends (Bits and Pieces)," also reached the country Top Ten. Smith would soon cut a pair of duet singles with Shirley Collie, who would later tour and record with Willie Nelson, as well as marry him in 1963. However, while Smith enjoyed a few more modest hits, he didn't score another country smash, and as he spent more time on the road, he developed some bad habits, including an appetite for alcohol and amphetamines. In 1965, Smith was in a serious auto accident in LaGrange, Texas that left him with severe back injuries, and it was nearly a year before he was well enough to return to performing. By this time, Smith's contract with Liberty had lapsed, and given his increasingly difficult reputation, they opted not to renew his deal. Smith cut a few sides for the tiny Slick Records label, as well as one single for Mercury, but commercially, the records went nowhere, and Smith's problems with drugs and drink came to a head when he was arrested for robbing a pharmacy in Huntsville, Alabama. After serving 18 months behind bars, Smith relocated to Texas, and while he performed occasionally in his spare time, he'd hung up his dreams of resuming his career, though he did cut an album for a rockabilly specialist's label. In the spring of 1977, Smith was persuaded to perform in London, England, as part of a bill that included fellow first-generation rockabillies Charlie Feathers, Jack Scott, and Buddy Knox. The show was a great success, and Smith was surprised to learn he had a loyal fan following in the United Kingdom. Energized by the experience, he returned to England for more concerts later that same year, and increased his performance schedule in the United States. Smith was making plans for another British tour when he suffered a heart attack which claimed his life on January 30, 1980.