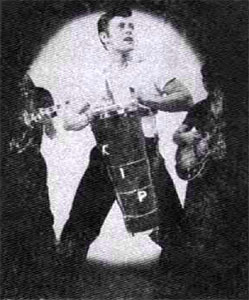 Lead singer of Sleepwalkers during his time at Union High School and later teamed up with rival musicians from Fairfax High School to form the early version of Kip Tyler and the Flips. In early, 1957, Kip caught the attention of arranger Joesph Gershenson who hired him to work on a project connected to the movie "Rock, Pretty Baby". Stemming from the success of movie, Tyler took on the name of Jimmy Daley (the main character of the movie who he provided a voice over for) and formed the band Jimmy Daley And The Ding-A-Lings. He recorded his first album at Decca records. Songs such as "Red Lips and Green Eyes", "Hole in the Wall" and " Bongo Rock" were produced at Decca Records. Unfortunately for Tyler, the sequeal to "Rock, Pretty Baby", "Summer Love" was a flop and so was the career of his surname, Jimmy Daley.
In late 1957, he formed a new group, Kip Tyler And The Flips, responsible for the hits Jungle Hop, Let's Monkey Around and She's My Witch. When the band split in 1959, Tyler attempted a solo career, but with limited success. In 1964 he recorded for the label Gyro Disk, and his success briefly peaked after recording a number of songs. Tyler's last single was made in 1965.