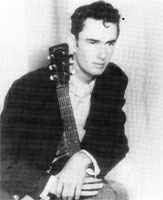 Al Urban was born on a farm in Gonzales, Texas, on March 1, 1935. He began playing the guitar in his mid-teens and formed his first band, The Daybreakers, in the early fifties and obtained a regular gig at the popular Log Cabin Inn north of Luling. In 1956, Urban recorded his original songs Lookin’ For Money and I Don’t Want To Be Alone at Gold Star Studio in Houston. Al sent the master Tape to Charlie Fitch who agreed to release it on Sarg Records. The record debuted on November 30, 1956 receiving rave reviews from Billboard magazine. It was a modest hit and sold respectably. Urban was invited to appear on the Louisiana Hayride on the strength of the single. He was a prolific songwriter often returning to Bill Quinn’s Gold Star Studio on his own dime to record his compositions. George Jones was using the same studio during the same period and the two often shared the same backing band. Charlie Fitch released four more Urban records and passed on several others. Disgruntled with Fitch, Urban started his own label, Fang to promote his releases, and eventually recorded for several other small labels as well, including Kash and Tennessee. He continued to be an active performer, but tiring of the nightly grind; he began concentrating more on songwriting. His windfall came in 1971 when Charley Pride recorded several of his songs including the hit ,I’m Beginning to Believe My Own Lies that was included on the Grammy award winning album Charley Pride Sings Heart Songs.