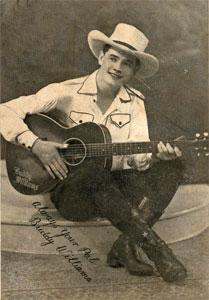 Born Harry Taylor, 5 September 1918, Newtown suburb, Sydney, New South Wales, Australia, d. 12 December 1986. A major pioneer of Australian country music, as a child Williams never knew his parents and was placed in an orphanage, where he soon became a nuisance to the authorities by his attempts to escape. Fostered out to a farming couple in Dorrigo, he found he was treated more as an unpaid worker than as an adopted son. He heard recordings of Jimmie Rodgers when visiting neighbours and was immediately captivated by the music. When 15 years old, he ran away and did a series of labouring jobs. He had learned to play guitar and, while working in a quarry at Coffs Harbour, was dared to sing on the streets and was amazed at the amount of money he received. In 1936, he made a successful appearance at the Jacaranda Festival and as Buddy Williams, he continued to earn his living busking around the country, spending some time at Newcastle, before heading for Sydney.
On 7 September 1939, singing six of his own songs, he made his first historic recordings for Regal Zonophone Records (who later became EMI Records), he became the first Australian-born solo country recording artist (Tex Tex Morton recorded in 1936 but he was a New Zealander). Later stating that he gained inspiration from Goebel Reeves and Jimmie Rodgers, he continued busking but soon gained radio exposure, where he built a reputation with his ballads and yodels. He made further recordings on 14 May 1940, including his well-known ‘Australian Bushman’s Yodel’ and ‘Happy Jackeroo’. He ran a sawmill in Walcha, supplying hardwood to the army, before enlisting for military service himself. He served as a Bren gunner and in spite of his army commitments, he recorded 30 sides during his period of war service. In 1941, he made two recordings with first wife Bernie Burnett (they were later divorced) and two more in 1943, including ‘Stockmen In Uniform’. In March 1945, he recorded five songs including ‘Where The Lazy Murray River Rolls Along’ with Lenore Miller, who later achieved success as folk singer Lenore Somerset in the 60s. A few weeks before the end of the war in 1945, he was seriously wounded while serving in Borneo, and defied medical predictions by recovering.
In 1946, he recorded his noted ‘The Overlander Trail’ and made a film appearance. He married Grace Maidman in Brisbane on 31 January 1947, and the two formed and ran rodeo tent shows, which featured a variety of acts, including noted rodeo performers, clowns and magicians. Williams naturally sang and also did trick shooting and showed his skill with a bullwhip (sadly, in 1949, their first child Donita, then aged 21 months, tragically died in Tasmania, when she was accidentally run over by a truck driven by one of the rodeo riders in Williams’ show). From the late 40s throughout the 50s, he continued to tour with his show and to record regularly. The rodeo side of the show was eventually dropped and it became a Country and Western Variety Show. His recordings were generally of Australian songs, many of his own writing, but some cover versions of American hits were made, including his very successful 1953 recording of ‘Missing In Action’. Between 1958 and 1964, he recorded almost 60 sides and he was one of the last Australian artists to forsake just a solo guitar and use a backing group. In 1965, he changed labels to RCA Records. It was around this time that he was joined both on his recordings and on stage by his son Harold George (b. 23 June 1948, Rylstone, New South Wales, Australia) and daughter Kaye Elizabeth (b. 31 January 1950, Ivanoe, Victoria, Australia). Together they recorded a series of albums. In 1972, youngest daughter Karen Williams (b. Karen Anne Williams, 20 May 1957, Brisbane, Queensland, Australia) also became part of the Williams Family Show. In 1972, he toured in company with another pioneer, Tex Morton.
In 1977 and 1978, Williams suffered heart attacks, which forced him to stop touring personally, but the Williams show continued. In 1977, he became the second artist (after Morton) to be elected to the newly created Country Music Roll of Renown (Australia’s equivalent to Nashville’s Country Music Hall of Fame). In 1979, RCA presented him with a gold-plated map of Australia to celebrate his 40 years of recording country music - one of the many awards that he has received. He has written many songs and three of them, namely ‘Where The White Faced Cattle Roam’, ‘Heading For The Warwick Rodeo’ and ‘Music In My Pony’s Feet’, are included in Australia’s 50 most popular country songs. His albums include a tribute to Jimmie Rodgers and Hank Williams, and one also features songs written by Shorty Ranger, who penned Williams’ hit ‘The Big Banana Land’. In 1979, Williams featured in a documentary called The Last Fair Dinkum Aussie Outback Entertainer. There is little doubt that he has been a major inspiration for many Australian artists, and experts on the genre rate some of the recordings that he made between 1942 and 1946 among the best examples of Australian country. Harold Williams went on to record in his own right, even recording the album Buddy Williams Jnr Sings. He later did solo work and in 1982, with Lindsay Butler, also formed the Tamworth Country Show Band. Kaye Williams also recorded in her own right, being joined by her father for two tracks on her albumJust Between The Two Of Us.