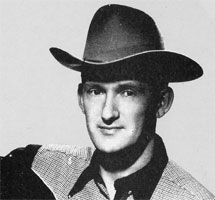 Songwriter Lawton Williams remains best remembered for Bobby Helms' "Fraulein," a crossover smash that topped the country charts in the spring of 1957. Born July 24, 1922, in Troy, TN, Williams was the son of a sharecropper who moonlighted as a fiddle player with local string bands. A devout fan of radio's Grand Ole Opry, he worshiped Roy Acuff and Gene Autry, and as a teen taught himself guitar. While stationed in Houston during World War II, Williams befriended country singer Floyd Tillman, whose insight and advice were instrumental in nurturing his latent songwriting skills. Williams also began performing, and in the late '40s cut a handful of little-noticed singles for labels including Sultan and Fortune. He spent much of the decade to follow co-starring on Dallas radio station KRLD's legendary Big D Jamboree, with unheralded stints on labels including Four Star, Coral, and Imperial. "Fraulein," written following Williams' ill-fated engagement to "a little blonde-headed German girl that [he] had met during World War II," not only launched his career but rocketed Helms to national stardom, topping the country charts for four consecutive weeks and earning Country Song of the Year honors at the 1957 Billboard and Cashbox Awards.
A sequel, "Geisha Girl," hit number four for Hank Locklin, and in 1958 "Color of the Blues" proved a huge hit for co-writer George Jones. Williams also continued recording as a solo act, signing to the Fort Worth-based Le Bill label for 1960's "Mama Doll." His straightforward, defiantly traditional country approach fared poorly in the post-rockabilly era, however, and outside of the 1963 novelty "Everything's OK on the LBJ," cut during a brief tenure with RCA Victor, he remained a stranger to radio. Williams' songs continued enjoying success via other artists, however, and in 1962 Bobby Bare scored with "Shame on Me," followed a year later by Jim Reeves' "Señor Santa Claus" — other compositions of note include Gene Watson's "Farewell Party" and Locklin's "Paper Face." In the autumn of his life, Williams founded his own label, TIMA, and in 2003 issued the LP Mending Fences. He also reunited with Tillman to record the classic "It Just Tears Me Up" for the Tillman tribute LP The Influence. Williams died of respiratory illness on July 26, 2007, just two days after his 85th birthday.