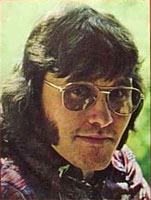 Born Roy Neill Acuff, 25 July 1943, Nashville, Tennessee, USA. The son of Roy Acuff, at times during his childhood, Roy Jnr. saw little of his father owing to his touring commitments. Initially showing little interest in music, he began to work in the offices at Acuff-Rose Music but in 1963, unbeknown to his father, he learned to sing and play the guitar. In 1965, he was given the opportunity to record for Columbia Records by Wesley Rose and a month later his father introduced him on the Grand Ole Opry. He played various venues in the USA and even toured US military bases in Germany. Occasionally he appeared with his father and in the early 70s, he sang backing vocals on some of his recordings. However, audiences made him nervous and he never enjoyed performing. He was much happier working behind the scenes and by the mid-70s, he had retired as a performer to become an executive of Acuff-Rose. During his brief recording career, he wrote and recorded several of his own songs including ‘Back Down To Atlanta’ and ‘Street Singer’.