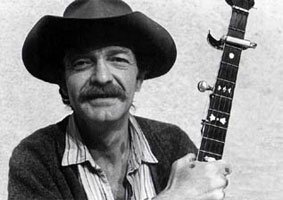 Ask the average folk enthusiast who Derroll Adams is, and chances are you'll get a vague glimmer of recognition, followed by a shrug of puzzlement. Few figures have effected as much of an impact on other musicians, while falling by the wayside before the public. Indeed, the only comparable figure who comes immediately to mind is England's Davy Graham, who influenced an entire generation of folk and rock guitarists, and at least one superstar (Paul Simon), but hasn't courted serious record sales in decades.
Born Derroll Lewis Thompson in Portland, Oregon, he was the son of a vaudeville juggler and master storyteller. At age 16, just about the time that the Second World War was breaking out, Adams joined the Army, but was discharged within a few months when his age was discovered. He later served in the United States Coast Guard, after which he attended art school — it was during this time that Adams chanced to see a concert by Josh White, which set him on the road to becoming a musician. His subsequent hearing of records by Pete Seeger, Woody Guthrie, and Cisco Houston only reinforced his love of folk music, and in a surprisingly short time, he'd become proficient on the guitar and a near-virtuoso on the banjo. He played for audiences as part of former Vice President Henry Wallace's 1948 presidential campaign. During the 1950s, Adams hooked up with the folk singer Odetta in an organization known as "World Folk Artists," and began building an audience; by the end of the decade, his banjo playing was being used on some film soundtracks.
In 1957, Adams had his first successful song, "Portland Town," an account of birth, life, and death that became his magnum opus, covered widely over the years by other folk singers. Around the same time, he met up with Ramblin' Jack Elliott, who, with his wife, invited Adams to come to England with them. Over the next few years, the three played numerous folk clubs in England, while Adams resided for a time with songwriter Lionel Bart and also performed on the European continent. Adams and Elliott also made recordings together for Topic Records, which was then England's leading folk label. In 1966, while traveling through Europe, they cut an album together in Milan, Italy. By this time, Adams was a fixture on the European folk scene, his rough-hewn voice and distinctive banjo style drawing a serious following, especially among the new generation of folk performers coming up behind him.
All wasn't well, however, as Adams became increasingly disenchanted with the widening audience for folk music. Where the clubs in the early '60s had been attended by serious listeners with an honest interest, by 1966 he found himself playing more often to rowdy, drunken listeners who cared little for what he was actually doing. He became known for incidents in which he would smash his guitar and leave the stage. Finally, he met a woman from Belgium who became his fourth wife, and he left the music business to help run her decorating business.
His influence lingered, however. In 1967, even as Adams was temporarily retired, he became the subject of perhaps the best song that Donovan Leitch (aka Donovan) has ever written, "Epistle to Derroll." Appearing on the Gift From a Flower to a Garden album, the words and music reflected the debt that Leitch owed Adams as a musician and songwriter — the entire song, and specifically the line "bring me word of the banjo man with the tattoo on his hand," may be the most poignant and haunting in Donovan's entire song output.
Both his wife's business and the accompanying marriage failed, however, and Adams resumed his performing career in Europe's folk clubs, his name still widely known on his adopted continent. He proved a fairly controversial figure, however, for his rejection of authenticity and his purist approach to folk music; he insisted that old songs could be performed perfectly well in new ways, and he occasionally got drunk and swore on-stage .
Still, he continued playing, and in 1991, the folk community — including the members of Pentangle, as well as his former partner Elliott and veterans like Happy Traum — turned out for a concert celebrating Adams' 65th birthday, which was later released on record. Derroll Adams passed away on February 6, 2000 in Antwerp, Belgium. He remains unjustifiably better known in Europe than in the country of his birth.