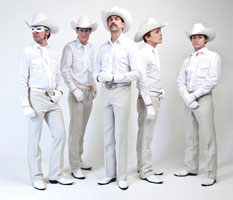 Country band Brent Amaker and the Rodeo were formed by veterans of the Seattle, WA, music scene, some of them rock musicians initially, consisting of native Oklahoman Amaker, Tim Harmon, Sugar McGuinn, and Curtis Andreen, with Louis O'Callahan joining later. (O'Callahan was replaced subsequently by Mason Lowe.) Deliberately retro in their approach, the group began by recording two monophonic 7," 45 rpm vinyl singles, "They Make Cowboys in Montana" and "This Is the Gun." They recorded their self-titled debut album in mono on a four-track reel-to-reel tape deck. Initially, they sold it at gigs in 2006; it was released nationally by J-Shirt Records on February 20, 2007. Gravewax released Amaker and the Rodeo's second album, Howdy Do!, on November 18, 2008.