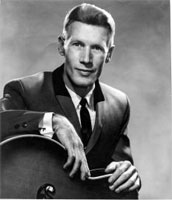 Singer/songwriter and guitarist Ernie Ashworth listened to the Grand Ole Opry as a youth in his native Huntsville, AL, and he began writing songs even before taking up the guitar. By 1948 he was playing in a band called the Tunetwisters and appearing on Huntsville radio station WBHP. Making the move to Nashville the following year, Ashworth earned a living as an early member of that city's fabled community of songwriters and performed on radio stations WLAC and WSIX. He became a staff writer for the Acuff-Rose publishing house, composing songs for such performers as Little Jimmy Dickens and Carl Smith and even crossing over to the pop sphere when he placed "I Wish" with rock & roll crooner Paul Anka. In 1955, Wesley Rose greased the wheels for Ashworth's signing to the MGM label as Billy Worth, but the six singles he cut for the label went nowhere on the charts. In 1957, Ashworth returned to Alabama and took a job at Huntsville's Redstone Arsenal missile plant.
Meanwhile, Rose remained determined to further Ashworth's music career and managed to get him signed to Decca in 1960. Now billed as Ernest Ashworth, he hit the Top Five with his first Decca single, "Each Moment (Spent With You)." That same year he scored a Top Ten hit with "You Can't Pick a Rose in December." In 1962, he signed with the Acuff-Rose-owned Hickory label and again hit the Top Five with "Everybody but Me." A year later, he had his only number one hit with the John D. Loudermilk-penned "Talk Back Trembling Lips." That song was tailor-made for Ashworth's vulnerable tenor voice, influenced by Anka and by Buddy Holly but with a more distinctively country reediness; it propelled him to Most Promising Male Artist awards from Billboard and Cashbox magazines and to the stage of the Grand Ole Opry in 1964. With further successes, such as the self-penned "I Love to Dance With Annie," Ashworth was a consistent hitmaker up to the release of 1970's "The Look of Goodbye." After four singles on the independent O'Brien label flopped, he retired to his farm in Lewisburg, TN, continuing to appear regularly on the Opry and occasionally touring the country. In 1989 he became the owner of Ardmore, TN, radio station WSLV, and his occasional recording releases in the 1990s found favor among tradition-minded European country listeners. Ernie Ashworth is deceased on March 2 2009 in Hartsville (Tennessee).