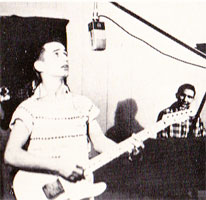 Swamp pop musician Rod Bernard was born in Opelousas, Louisiana in the early '40s and made his professional debut on KSLO Opelousas when he was only ten. Two years later, Bernard was a deejay at the station, but in 1954, his family moved to Winnie, Texas. There Bernard became accquainted with the town barber Huey Meaux, who later became a major producer of Cajun recordings. By the time he was a teenager, Bernard formed his first band (The Twisters) and cut two records on Jake Graffagnino's Carl label.
They then recorded King Karl's "This Should Go on Forever" for Floyd Soileau's Jin label (which eventually licensed the recording to Chicago's Argo label) and took the records to Huey Meaux — who was now hosting a French music show on KPAC Port Arthur. Meaux had the song played throughout East Texas and took a copy to the Big Bopper, who played it at KTRM Beaumont, Texas. It took seven months, but eventually the record made it to the Top 20 on the pop charts. Bernard then appeared on Dick Clark's American Bandstand (where he had to sanitize some of the lyrics for mainstream audiences) and signed with Mercury Records. After recording over 40 songs for the label, Bernard watched as only four sides were released. One of them, "One More Chance," made it to the pop charts as a minor hit.
By 1962, Bernard's Mercury contract had run out. He began working for Hall-Way Records, where many of his sessions were backed by Johnny and Edgar Winter. He achieved small success with a rocked up version of the traditional Cajun song "Colinda," before Bernard became a deejay and musical director at KVOL , and later a sales executive at KLFY-TV, both Lafayette stations. He also performed on television with the Shondells, a group he had co-founded in 1963. In 1965, a compilation of 12 songs he and the Shondells sang on the show were released as Saturday Hop on the La Louisienne label. The group also released a single, "Our Teenage Love" for Teardrop. Bernard and Carol Ranchou of La Louisianne founded the Arbee label. Bernard released several albums throughout the seventies and continued to work for KLFY-TV for years. In the late '90s, Rod Bernard returned to the studios and recorded The Louisiana Tradition.
Rod Bernard passed away on July 12, 2020.