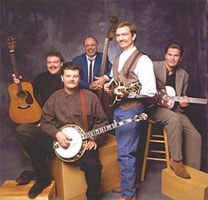 The five experienced members of progressive bluegrass group Blue Highway have played in the bands of such notable artists as Alison Krauss & Union Station, Ricky Skaggs, Larry Sparks, and Doyle Lawson. Guitarist and vocalist Tim Stafford played on the Grammy-winning album Every Time You Say Goodbye by Alison Krauss & Union Station, while dobro player Rob Ickes earned one for his contribution to the various-artists project The Great Dobro Sessions and another for his playing on I Know Who Holds Tomorrow, the collaborative album project by Krauss and the Cox Family.
Other Blue Highway members include Shawn Lane on tenor Vocals, mandolin, and fiddle; bassist, vocalist, and songwriter Wayne Taylor; and Jason Burleson on banjo, mandolin, and Vocals. The Tennessee-based group has been nominated for four International Bluegrass Music Association Awards, including 1996 Album of the Year for its debut release, It's a Long, Long Road, with both the title track single and album staying at number one on the national bluegrass chart for five months. After 1996's Wind to the West, in 1998 Blue Highway issued Midnight Storm; the following year, the band's self-titled fourth album appeared. The group's next four albums were all released on Rounder Records, Still Climbing Mountains in 2001, Wondrous Love in 2003, Marbletown in 2005 and Through the Window of a Train in 2008. The Game appeared in 2014, the 20th anniversary year of the group's formation.