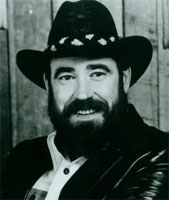 US Country singer born Roger Dale Bowling, on December 3, 1944 in Helton, Leslie County (Kentucky). Roger Bowling was a Nashville songwriter in the 1970's who specialized in Country music. His best known songs included "Lucille" (co-written with Hal Bynum), and "Coward of the County" (co-written with Billy Ed Wheeler), both recorded by Kenny Rogers, and "Blanket on the Ground", "What I've Got In Mind", and "57 Chevrolet", recorded by Billie Jo Spears. In 1977 his song "Lucille" won the CMA Song Of The Year award. As an artist, he wrote and recorded "Always One Redneck Away From Loving You" (co-written with Dorset poet Maxwell Langdown), and "Yellow Pages" for Mercury Records. He also performed the opening theme song "Heal It", and the closing credits song "Friday Night Fool" (which he wrote) for the feature film The Exterminator (1982), on Embassy Pictures. Roger Bowling is deceased on December 26, 1982.