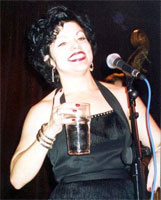 With a backward glance toward classic country and rockabilly, Marti Brom's music has honed a distinct edge on the contemporary alternative roots scene. Born in St. Louis, Brom spent her summers in New Orleans, where she absorbed the rich music of the South. With time, Brom began listening to punk and new wave bands like Blondie and Chrissie Hynde. Hynde's early career, in fact, inspired Brom's first attempt to become a singer. She saved her money and flew to England, where she planned on "hanging out" until she was discovered. When she arrived and informed the authorities that she had no idea how long she was staying, they placed her in the Beehive, the airport jail. Brom spent the remainder of the money she had saved for a plane ticket back to St. Louis. Back home, Brom was introduced to country legend Patsy Cline by a high school student named Michael Stipe — the future lead singer of R.E.M. — that she'd met at Rocky Horror Picture Show in St. Louis. She also became infatuated with jazz singer Billie Holiday and learned all of her songs. Brom's official start came when her husband, Bobby, an officer in the Air Force, brought home a flyer for an audition. Although frightened, Brom received a part in a musical titled The 1940s Radio Show. Shortly after that, she met High Noon singer Shaun Young and was invited to sit in with the band. Brom recorded her first single, "Crazy Fever," in 1992 and followed with two more singles in 1995 and 1996. It was the release of Mean in 1998, however, that truly showcased her potential. Released in a reel-to-reel box, the package included an eight-song CD and four mono 45 rpm records. The vintage packaging also mirrored the vintage country sound. Soon, Brom began to release a steady stream of albums on Goofin' Records including Snake Ranch in 1999 and Feudin' & Fightin' in 2000. In 2003 she returned with Wise to You! and in 2005 with Sings Heartache Numbers. Both Brom's Vocals style, recalling Patsy Cline, and her use of a classic country sound, infuses her music with an authentic feel that seems more like the real thing than a throwback to yesterday.