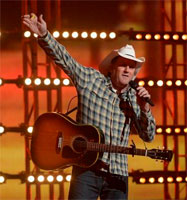 Though he's never had a substantial hit, Marty Brown won a devoted following among hardcore country fans thanks to his twangy, classic-style honky tonk and a nasal delivery straight from the hills of Kentucky. Specifically, Brown was raised in the small tobacco-farming town of Maceo, and started playing the local honky tonks at age 14. He later recorded a demo tape and hitchhiked to Nashville, where he was profiled on the news magazine 48 Hours and secured a contract with MCA. His debut album, High and Dry, was released in 1991 and won fierce praise for its raw energy, wide musical range, and unrepentant hillbilly attitude. Afraid of being pigeonholed because of the latter, Brown moved into a more commercial sound for the 1993 follow-up, Wild Kentucky Skies; though it wasn't a hit, it helped continue to build Brown's fan base, as did his tour with Jimmie Dale Gilmore. 1994's Cryin', Lovin', Leavin' also failed to bring Brown to a wider audience, despite continued acclaim, and MCA parted ways with him afterwards. Brown signed with the independent label Hightone and debuted for them in 1996 with Here's to the Honky Tonks, which again was released to favorable reviews.