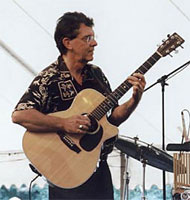 Bluegrass and jazz acoustic guitarist John Carlini is the son of musicians. His father was a violinist for the New York Philharmonic, his mother a concert pianist. He became interested in bluegrass in his youth and came under the influence of bluegrass fiddler Tex Logan. Enlisting in the navy, he attended the Navy School of Music, then toured in the U.S. Navy Show Band for three years. After leaving the military, he enrolled at the Berklee College of Music, from which he graduated with a major in arranging and composition, with guitar as his main instrument. He composed and orchestrated music for the 1978 film King of the Gypsies and also appeared onscreen performing with Stephane Grappelli. He became a member of the David Grisman Quintet and performed on the group's 1990 album Dawg '90. In 1992, he orchestrated the music for the off-Broadway musical Song of Singapore, serving as conductor and associate producer of the original cast album. In 1995, he recorded a duo album with Tony Rice, River Suite for Two Guitars, released by Sugar Hill Records. The same year, he served as arranger/conductor and played guitar on the CMH album Plectrasonics by the Nashville Mandolin Ensemble. He formed the John Carlini Quartet with mandolinist Don Stiernberg, bassist Brian Glassman, and drummer Steve Holloway, and issued the band's debut album, The Game's Afoot!, on FGM Records in 2003.