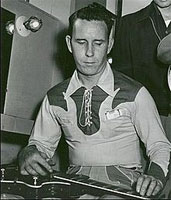 Kenneth Ray "Thumbs" Carllile was an innovative guitar player and songwriter. The son of an impoverished Illinois tenant farmer, he began playing music at the age of eight after his sister Evelyn won a dobro for selling balm. He used the new instrument so much that his irritated sister hid the steel bar, but the resourceful young man began using his thumbs to practice. When his father gave him a Silvertone guitar, Carllile's thumbs were too short and fat to make it around the neck, so he began playing it on his lap like a dobro. Carllile's family moved to Granite City, Missouri when he was ten. There he made his debut playing "Sweet Georgia Brown" during a Ferlin Husky performance. He was tossed out of high school at age 16 for refusing to shave and then began performing regularly with Husky until being discovered by Little Jimmy Dickens during a performance in St. Louis. Dickens was impressed and gave Carllile the nickname "Thumbs," a moniker Carllile never really liked.
From 1949 to 1952, Thumbs played with Dickens' Country Boys. In 1952, he began a two-year stint in the Army's Special Services. He was stationed in Stuttgart, Germany when he met and married singer/songwriter Virginia Boyle in 1955. After his discharge, Carllile played with Bill Wimberley's Rhythm Boys and Red Foley's Troupe. As a soloist, he regularly appeared on the Ozark Jubilee. He met guitar great Les Paul, who was impressed by both Boyle's writing and Carllile's skill and took them to his home recording studio to lay down enough tracks for two albums. Later that year, Carllile sang a duo with Ginny O'Boyle, "Indian Girl, Indian Boy." Two years later he joined the Wade Ray Five and Ray's Las Vegas band. Carllile joined Roger Miller in 1964; later, Miller helped Carllile sign with Smash Records, where he released two albums, Roger Miller Presents Thumbs Carllile and All Thumbs, in 1965. During 1966, he released several singles, including "Let It Be Me," "Caravan," "Blue Skies," and "Hold It." In 1968, he made the album Walking in Guitar Land. Although no singles were released from it, three songs, "It's a Good Day," "Work Song" and "High Noon," found favor with the public.
In 1986, Carllile, whose daughter Virginia had a minor hit with "Stay Until the Rain Stops" in 1980, underwent surgery for colon cancer. After recovering, he began playing on Sagebrush Boogie in Atlanta. In 1987, Carllile was preparing to perform as the opening act for Michael Hedges when he suffered a massive coronary and died.