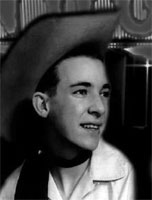 Born in 1937, this musician wasted little time beginning his professional singing career. By the age of 16, "Little" Joe Carson was performing and writing his own material. In 1956, he signed a recording contract with Capitol Records. Performing around Nashville and the southern United States, Carson was known as a great yet classic country singer. In 1963, he released his biggest hit, "I Gotta Get Drunk," a song that was penned by a young and promising songwriter at the time named Willie Nelson. Tragically, Carson was killed in a car accident in 1964; he was 27. That same year, a memorial album was released. In 2002, a selection of songs from Carson's catalog was issued as a retrospective. Hillbilly Band from Mars was released on Bear Family Records. From 1953 to 1964, Carson worked with the Mercury, Capitol, Liberty, and D record labels. His other big hits were "I Don't Have a Contact With You" and "Helpless."