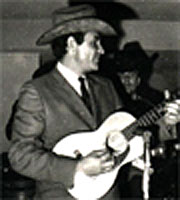 Fred Carter was a guitarist, singer, producer and composer. Beginning his professional career in the 1950s, the record charts are replete with his fingerprints across a number of genres. Though based in Nashville and serving as one its premier session guitarists, his influence can be heard on recordings as diverse as Muddy Waters, The Band, Waylon Jennings, Dottie Rambo, and Simon and Garfunkel. His songs have been recorded by acts as diverse as Dean Martin and Chet Atkins.
Carter was reared in the delta country in Winnsboro, the seat of Franklin Parish in northeastern Louisiana. His first partner in music was another Franklin Parish native, Allen "Puddler" Harris. Carter grew up with the heavy musical influences of jazz, country & western, hymns, and blues.These elements fused to form rock and roll in the 1950s, and Carter was a significant part of this development. He spent two years with Roy Orbison during his heyday in the late 1950s. He then worked with Ronnie Hawkins and the Hawks, and was principal guitarist for Dale Hawkins of "Suzie Q" fame. Carter and Harris also toured extensively with Conway Twitty when Twitty was playing rock and roll instead of country.
Carter settled into the Nashville session scene in the early 1960s, having become one of its players for the next two decades. His influence was not confined to Nashville however and
he was a fixture in the folk music genre of the late 1960s and early 1970s. Carter can be heard on a multitude of Simon and Garfunkel classics - most notably "The Boxer" in which he played four guitars, including the memorable finger-picking intro and conclusion. He can also be heard playing bass on Bob Dylan's "Lay Lady Lay" as well as principal guitar with Joan Baez, Neil Young, The Band and others. Carter was instrumental in bringing these acts to Nashville to record, helping Nashville's music landscape expand beyond its traditional boundaries. This influence can be heard on songs such as "The Boxer" which includes harmonica legend Charlie McCoy who Carter brought in to be part of the record. Other signature pieces for Carter include I've Always Been Crazy and Whistlers and Jugglars by Waylon Jennings.
Production credits for Carter include Levon Helm's American Son album on MCA Records, and Bobby Bridger's Heal in the Wisdom. He also helped Dolly Parton and Tanya Tucker
land their first record deals.
Carter was a principal member of the band Levon Helm and The RCO All-Stars. This band was composed of Levon Helm, Booker T. and the MG's, Steve Cropper, Donald "Duck" Dunn, Dr. John, Paul Butterfield, and the NBC Saturday Night Live horns.
Carter did not make the guitar his principal instrument until he was in his early twenties, having been a lifelong fiddle and mandolin player. Also of note, it has been widely reported
that Carter was Robbie Robertson's guitar teacher in the early days of touring with Ronnie Hawkins. Carter was also scheduled to appear in Martin Scorsese's The Last Waltz but
had to decline due to scheduling conflicts. Carter has had small roles in several movies including The Adventures of Huck Finn starring Elijah Wood.
Carter has received mention in many personal biographies, including Levon Helm's This Wheel's on Fire and Willie Nelson's Willie Nelson: An Epic Life. Nelson states in his book that Carter had the best touch or feel of any musician in Nashville.
Carter's daughter is country music singer Deana Carter, a CMA award winning artist.