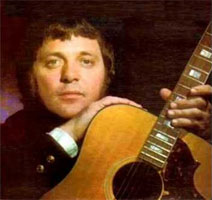 Country-pop singer Johnny Carver enjoyed his greatest popularity during the '70s, when he occasionally hit with countrified versions of soft pop smashes. Carver grew up in a rural area near Jackson, MS, and sang in a local country gospel quartet with his family. He went on to form his own band, the Capital Cowboys, which were sponsored by an ice-cream company. Carver embarked on his first national tour in 1959, playing at clubs and fairs, and moved to Los Angeles in 1965, where he made regular appearances on local television and led the house band at the Palomino club. His composition "New Lips" was recorded by Roy Drusky in 1967, and Carver landed his own record deal with Imperial. His self-titled debut album was released later that year, and contained the minor hit "Your Lily White Hands"; he had a few more modest successes with country-pop offerings like 1968's "I Still Didn't Have the Sense to Go" and 1969's "That's Your Hang Up." In 1972, he moved to ABC and had a major country hit with a version of Tony Orlando & Dawn's "Tie a Yellow Ribbon Round the Ole Oak Tree." A string of Top 40 country hits followed over the next five years, including the Top Tens "You Really Haven't Changed" (1973), "Don't Tell (That Sweet Old Lady of Mine)" (1974), and another country cover of a pop hit, the Starland Vocals Band's "Afternoon Delight" (1976). Carver's last Top 40 hit was 1977's "Living Next Door to Alice," and his final charting single was a 1981 cover of ABBA's "S.O.S." He subsequently became a regular performer in Branson, MO.