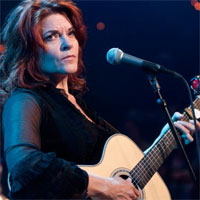 The history of popular music is littered with the careers of the children of famous artists, performers who manage to carve out some small measure of success based far less on talent than on the recognition that their famous names afford them. Perhaps no greater exception to this trend was Rosanne Cash, the daughter of Johnny Cash, whose idiosyncratic and innovative music made her one of the pre-eminent singer/songwriters of her day.
Born May 24, 1955, to her father and his first wife, Vivian Liberto, Rosanne was raised by her mother in Southern California after her parents separated in the early '60s. She was largely uninfluenced by her father's music until she joined his road show following her graduation from high school; over a three-year period, she was promoted from handling the tour's laundry duties to performing, first as a backup singer and then as an infrequent soloist. Still, Cash remained unsure of choosing a career in music, and took some acting classes; not wishing to succeed solely on the basis of her family's influence, she also worked as a secretary in London and traveled extensively abroad.
After releasing an eponymously titled solo record — later disavowed — in Germany in 1978, Cash signed with Columbia Records, and began performing with Texas singer/songwriter Rodney Crowell, who produced three songs for her American debut, 1979's Right or Wrong. The record featured three Top 25 hits, including "No Memories Hangin' Round," a duo with Bobby Bare. The same year, she and Crowell also married. Cash issued her commercial breakthrough Seven Year Ache in 1981; not only did the album yield three number one singles, the title track even crossed over into the Top 30 on Billboard's pop chart. However, the follow-up, 1982's Somewhere in the Stars, was a rush job, recorded during Cash's pregnancy. While failing to repeat Seven Year Ache's success, it did produce two more Top Ten singles, "Ain't No Money" and "I Wonder."
After a three-year hiatus, Cash returned with her most significant artistic statement yet in Rhythm & Romance, a deft fusion of country and pop that won wide acclaim from both camps. The record earned her two more number ones, "I Don't Know Why You Don't Want Me" (co-written with Crowell and a cover of Tom Petty's "Never Be You." In 1987, she issued King's Record Shop, a meditation on country music traditions which generated four successive number one hits in John Hiatt's "The Way We Make a Broken Heart," "Tennessee Flat Top Box" (a hit for her father in 1961), "If You Change Your Mind," and John Stewart's "Runaway Train." Also hitting number one was "It's Such a Small World," a duo with Crowell from his Diamonds & Dirt LP; not surprisingly, she was named Billboard's Top Singles Artist in 1988.
The next year, Cash assembled the retrospective Hits 1979-1989; one of the record's few new songs, a cover of the Beatles' "I Don't Want to Spoil the Party," pushed the consecutive number ones streak to five. By 1990, her marriage to Crowell was beginning to dissolve; Interiors, an essay on the couple's relationship, was released the following year, and while the record was the subject of great critical acclaim, it was a commercial failure that generated only one Top 40 hit, "What We Really Want." In 1991, Cash and Crowell divorced; The Wheel, released in 1993, was an unflinchingly confessional examination of the marriage's failure that ranked as her most musically diverse effort to date.
After a three-year hiatus, Cash returned with a vengeance in 1996; not only did she publish her first book, a short-story collection titled Bodies of Water, but she also issued her first release on Capitol Records, 10 Song Demo, an 11-cut collection of stark home recordings released with minimal studio gloss. In 2003, Cash returned with Rules of Travel, an album five years in the making and her first full-fledged studio release since The Wheel. Sony reissued Interiors, King's Record Shop, and Seven Year Ache in 2005, as well as a the greatest-hits collection Blue Moons and Broken Hearts: The Anthology 1979-1995. Cash returned to the studio that same year, releasing Black Cadillac in January of 2006.
In late 2007 Cash announced that she had been diagnosed with Chiari malformation, and was due to have brain surgery. After successful treatment for the condition, her slow route to recovery -- which included periods of being confined to her bed, as well as a fair amount of time being assisted in relearning certain patterns of speech -- led to a late-2008 return to the studio and the stage. Her subsequent project, The List, which appeared in 2009, featured songs from a personal list her father gave her when she turned 18 of what he considered the 100 most essential American songs, and the result was both a personal and a testimonial statement. Another hiatus from album preparation followed and in 2010 she published the acclaimed memoir Composed before founding and hosting the Johnny Cash Music Festival in 2011, in order to raise money for the restoration of her father's childhood home in Arkansas. Next, her 2012 song "Land of Dreams" was used in a worldwide campaign to promote the American tourist industry, before 2013 brought sessions for her first album of original material in eight years. The River & the Thread was expected in early 2014.