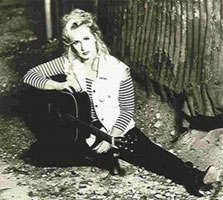 Versatile singer/songwriter Cee Cee Chapman spent much of her life surrounded by country music. The daughter of a career Navy man who taught her how to play guitar, she began performing professionally with her father during her teens, and by age 16, was working on her own in Virginia and North Carolina. Chapman made her first simple demo when she was 20 and sent it to various record companies. Liberty Records' Scotty Turner liked her work and encouraged her to send the demo to songwriter Bobby Fischer, who was seeking out fresh talent. Five years passed before he, Charlie Black and Austin Roberts got together with Chapman to make new demo recordings. She signed with Fischer and they went to Nashville to let Dick Whitehead of Curb Records listen to the recordings. In 1988, Chapman and her band Santa Fe debuted in the Top 60 with "Gone But Not Forgotten." The following year she recorded her first album, Twist of Fate, and from it came two more minor hits, "Frontier Justice" and the title track. The flip side of her first single, "Love Is a Liar," also made some impact. In 1990, she released an eponymous album, but none of the singles made it to the charts. She did not have a successful single until 1993, with the minor hit "Two Ships That Passed in the Moonlight."