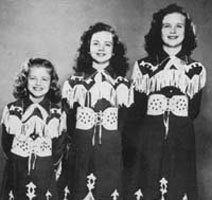 Trio of young ladies were big on the hillbilly music scene in the mid-1950s. Mary Jo Chelette was the leader and the oldest—only 14 years old. The girls had already starred on radio station KPAC in Port Arthur, Texas for five years. Mary Jo could sing both popular and western tunes. She also got teased about her red hair and freckles, too. The girls also appeared on Ted Mack's Amateur Hour on two consecutive nights. Around 1955, they were recording for the Starday record label.