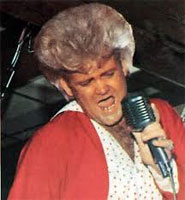 The outlandish Wayne Cochran — wild outfits, high snow-white pompadour — and his musical odyssey began in 1955 with his first band. By 1963, after a move to Macon, GA, and numerous personnel changes, the outfit became known as Wayne Cochran & the C.C. Riders ("Cochran's Circuit Riders"). Inspired by James Brown and his relentless touring schedule, Cochran purchased an old bus and hit the road. The group took its high-octane show all over the South and Midwest before settling in Miami for an extended stay as the house band at the Barn (aka "the House of Soul"). By this time, the C.C. Riders also had horns to accompany its boogie rhythm section and Cochran's over-the-top Vocals. He was a big favorite at the Barn, and stars such as Jackie Gleason caught his shows regularly. (The enterprising soul singer even wrote a cookbook while in Miami entitled Wayne Cochran's Soul Recipes.)
He cut his first record, " "My Little Girl," on Scottie in 1959. Cochran cut two singles for Gala in the early '60s ("Funny Feeling" and "Liza Jane") before moving on to Confederate ("Linda Lu") and the Aire label ("Cindy Marie"). He obviously loved cutting songs titled with women's names and the trend continued on King Records with "Little Orphan Annie." He also redid his own "Last Kiss," (which he wrote) for his second King single; while "Last Kiss" didn't do much for Cochran, it exploded for J. Frank Wilson & the Cavaliers, who reached number two on the pop charts with it in 1964.
All the singing — at the top of his lungs — along with the usual musical excesses reduced his once-mighty voice to a fraction of what it was. By the time he started appearing on national television shows, the Wayne Cochran that thrilled throngs in Southern pits and Midwest holes was all show, the voice practically gone, so he ratcheted up the live shows with as much gloss as he could. Significant singles included a remake of Bob & Earl's "Harlem Shuffle," which bubbled onto the pop singles chart, and "Sleepless Nights." Wayne Cochran & the C. C. Riders had a Miami reunion in Miami on July 26, and on August 1, 2001 in Hollywood, FL. The C. C. Riders were many, and even included renown jazz bassist Jaco Pastorius at one time. Cochran went through years of turmoil before becoming a born-again Christian and pastor; he started a ministry in 1981.
Wayne Cochran died on November 21, 2017 in Miami (Florida).