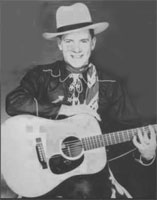 b. Gordon D. Cochrane, 15 June 1914, Sweet’s Corner, Nova Scotia, Canada, d. 1995. Cochrane learned to play the guitar and first sang during his high school days and had some thoughts of a musical career after being encouraged by Cecil and Leslie Flynn, who played for local dances. However it was not until 1934, that he gained a daily 15-minute spot on CHNS Halifax, where he adopted the name of Tex as being more suitable for his music. No doubt inspired by fellow Canadian Wilf Carter’s popular ballads and yodels, he wrote many of his songs. The listener reaction soon saw him offered sponsorship by Mother’s Own Tea for a programme on the larger and more powerful CFCY Charlottetown, Prince Edward Island. Here, he also played and toured with the Merry Islanders, a popular country band; initially they were led by George Chappelle but later by the more popular Don Messer. Cochrane’s performances with the band and at CFCY, attracted the attention of Hugh Joseph of RCA - Victor Records who gave him the opportunity to record. Between 1937 and 1939, he cut 16 self-penned numbers for that label all of which gained release on 78s. Complete with fine yodels, as and when required, they included ‘cowboy’ songs such as ‘Roundup Days In Cheyenne’, ‘My Old Cowpony And I’ and the wistful ‘Goin’ Home In The Moonlight’.
In 1940, Cochrane enlisted in the Canadian Army, where he served throughout World War II. After the war, he remained in the service until he retired with the rank of major in 1963 and so never returned to his musical career. Later, he worked as manager and public relations director in the transport department of a major food company until finally retiring to live in Frederictown, New Brunswick in 1979. In 1985, the German Cattle Records label released an album containing the 16 sides, which represent Cochrane’s total recorded output. A fine singer, yodeller and songwriter, Tex Cochrane merits his little place in history. He was inducted into the Nova Scotia Country Music Hall of Fame in 1998.