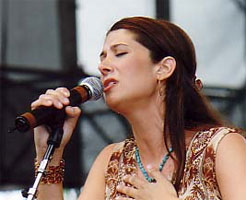 Growing up in Moore, OK, Kellie Coffey made her stage debut at the age of nine when she sang at the Oklahoma Opry. Her interest in music continued and Coffey attended the same high school that country star Toby Keith had attended. Her involvement in music took on a more serious course while attending the University of Oklahoma, where she participated in musicals and other performance activities. Relocating to Los Angeles to pursue a career as a singer, Coffey soon found work singing on demos, as well as doing sessions for television, film, and audio tracks used by Disney in their theme parks. She began making trips to Nashville to write and signed a publishing deal with Warner Chappell, followed by a record deal with BNA. Her first single, "When You Lie Next to Me," was released at the end of 2001, heralding her Dan Huff-produced debut, which was released the following summer.