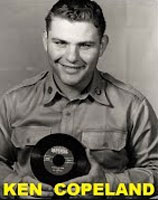 US Rock 'n' Roll singer born Kenneth Copeland, on December 6, 1936 in Lubbock (Texas). Ken Copeland recorded at Lin, Imperial and Imperial records. Later he became evangelist on " Believer's Voice of Victory ", a program of radio and television.
The late '50s are usually thought of as the rock & roll era, and they were, but there was another current running through music during that period: smooth pop music. Few historians of the era like to admit to the fact that while Elvis Presley sold more records than any other singer of the period, the second highest sales were racked up by Pat Boone on Dot. So a lot of record labels were looking for their Elvis Presley, but, profits being profits and the recording business being a business, they also had their eyes open for another Pat Boone.
That's where Ken Copeland came into the music business. He profited from the fact that Lin Records founder Joe M. Leonard, Jr. had tried and failed to sign Pat Boone. Having lost the promising young vocalist to rival Dot Records, Leonard was hoping to find someone else who could handle that kind of romantic repertory when he was approached by Copeland's parents, who were trying to get their son into music. Ken Copeland's smooth, romantic voice and his good looks impressed Leonard, and he was given a song, "Pledge of Love," that required a pop style — none of Dot's existing roster of talent, all centered on country, blues, and rock & roll, could handle it.
Copeland cut "Pledge of Love" at his first session for Lin in November of 1956, and it was released soon after. By early 1957, it had begun breaking out regionally, and was licensed to Imperial Records, which pushed it to number 17 nationally. Imperial actually took over Copeland's contract in the wake of that success and tried to score again, but he never had another hit. By the end of 1957, he was back at Lin Records, and he later saw releases licensed to Dot Records. He tried adapting to rock & roll with "Fanny Brown," and didn't do too badly, but also didn't do well enough to make a dent on the consciousness of America's teenagers: he simply wasn't a natural rock & roller and never seemed comfortable in public appearances, either. Copeland, like his parents (and, ironically, like Pat Boone), was a devout Christian, which had been the main focus of his life before music came along. By early 1958, he'd returned to the original direction of his life, and he later became a highly successful television minister.