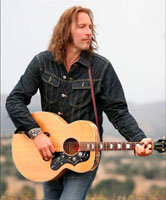 As an actor John Corbett is best-known for his roles on Northern Exposure and Sex & The City, two television shows where he played rugged yet sensitive guys -- guys that seemed at home in the outdoors, guys that were definitely guys, but they weren't overly macho; they were strong and supportive. Given that background, it shouldn't come as a great surprise that his eponymous debut album finds him singing rugged yet sensitive country; it's music that you could imagine Aidan singing as he builds furniture for Carrie on Sex & The City. But it's not so much that Corbett is capitalizing on his onscreen persona, it's that his strengths as an actor are his strengths as a musician: he comes across as a thoroughly likeable, normal guy, the kind of man that women fall for, the kind of man other men would have a beer with. Those charms translate as successfully on John Corbett as they do onscreen. Perhaps Corbett doesn't have the most distinctive voice, but it's sincere and has just the right amount of twang, and he sounds comfortable and assured, yet never cocky. It fits the country music that he's singing, which is straight-ahead and tuneful, relaxed and friendly. This surely isn't hardcore country, yet it proudly puts dobros, harmonicas, and twangy Telecasters on display, which all keep John Corbett far away from the realm of pop music, even when it has more than its fair share of hooky, memorable tunes. But what makes this a winning debut is that it feels natural and genuine, as if Corbett isn't attempting to parlay his success as an actor into a music career, he's just simply making the music he wants to make. Of course, that sense of naturalism made him appealing as an actor and it makes him appealing as a singer, especially for those who already are fans. But the best thing that can be said about John Corbett is that this laid-back, rootsy record can be easily enjoyed by country fans who aren't fans of Corbett the actor, or even by listeners who aren't even aware that he is an actor, and that' s a very tricky thing for an actor launching a singing career to pull off.