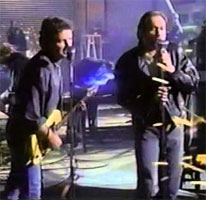 Bob Corbin and David Hanner met in high school, and began writing songs together after seeing the Beatles on The Ed Sullivan Show. The young musicians cut an album for Jubilee, but it went nowhere. It wasn't until college that the duo began to have some real success. Corbin and Hanner formed the rock band Gravel, and began gigging throughout Pennsylvania, Ohio, and West Virginia. But while the successful bar band recorded a few singles for Columbia, Gravel was never more than a regional phenomenon. In 1979, Gravel became the Corbin/Hanner Band and began to focus on a country-rock sound. They also added keyboardist Al Snyder, bassist Kip Paxton, and drummer Dave Freeland to the lineup. Over the next two years, the band scored four hits, including "Time Has Treated You Well," and recorded two albums for the Alfa label, Son of America (1980) and For the Sake of the Song (1981). But after touring through 1984, Corbin and Hanner decided a hiatus was in order and parted ways.
The duo regrouped in 1990 at the urging of Mercury Nashville president Harold Shedd, became simply Corbin/Hanner, and were soon at work on new material for the label. Black & White Photograph appeared in 1990; the release included five songs from each songwriter, with Corbin leaning more toward rootsy rock and Hanner on the 1960s pop of his youth. Just Another Hill appeared two years later and featured numerous songs co-written by the duo. They returned in 1997 with a live recording of a 1982 concert, and in 1998 dropped Every Stranger Has a Story, the first release on their new Liddl' Red Hen imprint. The album produced the title cut to Kenny Rogers' 1999 comeback album, and featured a few minor hits for Corbin and Hanner themselves. The songwriting team next focused on a few fan-friendly releases. 2000's By Request featured re-recorded versions of 20 of the duo's songs; 2002 saw the release of The Corbin/Hanner Band, which contained all 40 songs from the Alfa years, as well as both of the Mercury releases in their entirety.