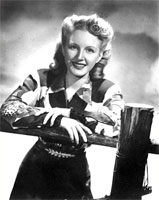 Born Helen Hagstrom, 20 October 1926, Cash, Arkansas, USA, d. 10 June 1997, Bakersfield, California, USA. Hagstrom’s family had emigrated from Sweden and first settled on a farm in Arkansas but they relocated to California soon after Helen was born. She attended school in San Francisco but when aged 14, described as a petite blue-eyed blonde with a vivacious personality, she began singing and yodelling on KYA with the western swing band of Dude Martin. Martin called her Carolina Cotton claiming that Carolina sounded better than Arkansas and the name stuck. In 1942, she moved to Hollywood and attracted by her stage presence and fancy yodels, she was immediately hired by top band leader Spade Cooley. She married singer Deuce Spriggens late in 1945, but they divorced the following year with her claiming his infidelity during the three months they were married. In 1944, she was offered a part in a movie called Sing, Neighbor, Sing which featured several country stars including Roy Acuff and his band and popular couple Lulu Belle And Scotty. Over the next 10 years she appeared in more movies with many top stars including Acuff, Eddy Arnold in Feudin’ Rhythm (1949) andHoedown (1950), and Bob Wills and co-starred in B-movie Westerns with both Gene Autry and Roy Rogers. In 1952, she had so established her reputation as a leading cowgirl yodeller that she was cast as Charles Starrett’s leading lady inThe Rough Tough West.
During the mid-50s, she was the most popular female singer on visual jukeboxes. Her biggest selling record was her self-penned ‘Three Miles South Of Cash In Arkansas’ which she recorded for the MGM Records label backed by Bob Wills’ Texas Playboys in 1951. Experts of the art class two of her best yodels as ‘I Love To Yodel’ and ‘Mocking Bird Yodel’ that were recorded on the King Records label in 1949. During the 50s, she made many overseas trips to entertain the American forces including several trips to Korea as well as to Japan and Germany. A second marriage to Bill Ates, the brother of actor Roscoe Ates produced two daughters but ended in divorce. She eventually appeared to grow tired of the lifestyle and trained to be a teacher. In the early 70s, she taught in US schools in Central America before teaching in Bakersfield, California, where she made her home. From time to time she attended Film Fairs and on occasions showed that she could still sing and yodel her old songs. Periodically, odd tracks of her appear on compilation CDs and some recordings made with Bob Wills appeared in the boxed set of Wills issued by Bear Family Records in 1985. In 1991, the German Cattle label released a complete album of her recordings.