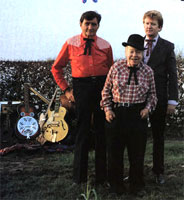 The Country Rockers' name alone was a wholly accurate gauge of their sound and aesthetics. A somewhat obscure trio based in Memphis, TN, the group was led by Durand Easley, an accomplished producer and session musician. While drinking in a Mississippi roadhouse in 1986, Easley hooked up with Sam Baird, a singer and guitarist he recognized from the latter's long tenure as a staple of the Memphis club circuit. Though Baird was in his mid-sixties at the time, he and the 35-year-old Easley decided to form a band, enlisting Gaius L. "Ringo" Farnham, a then 73-year-old drummer, to fill out their sound.
After developing a repertoire of country standards and eclectic obscurities, the trio cut a demo with Easley's brother Doug, a prominent indie rock producer. After the session, Easley left for Europe to tour with his old friend Alex Chilton; after shopping the Country Rockers' demo to New Rose Records, Chilton's label, a deal was struck. In 1989, the group issued its debut LP, Free Range Chicken, a varied collection of rockabilly, country, and novelty tunes featuring the original demo tracks along with newly recorded material; while the Vocals chores were split mainly between Easley and Baird, Ringo Farnham -- just like his namesake in the Beatles -- was allowed to sing on one cut. The Country Rockers' second effort, Cypress Room, appeared in 1991.