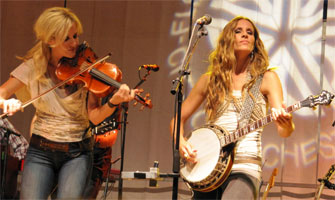 With Natalie Maines disinterested in recording a new Dixie Chicks album nearly five years after the last, sisters Emily Robison and Martie Maguire decided to abandon her as a temporary measure: they formed the side project Court Yard Hounds, releasing an eponymous album in May of 2010. Co-produced by Jim Scott, who mixed Taking the Long Way, it sounds like the Dixie Chicks minus Natalie: softer, sweeter, lacking a sense of surprise, but not unpleasantly so. If anything, there may be a touch too much pleasantness in the Court Yard Hounds, with the record often gently swaying to acoustic instrumentation and relaxing on its smooth surfaces. When guitars are cranked up, as they are on “Ain’t No Son,” Robison is almost buried underneath their steady thump, which isn’t the fault of the production: she’s too sweet a presence to cut through thick production. In other words, she lacks Maines' feistiness, something integral to the Dixie Chicks' crossover, but she’s a consummate pro, possessing exceptional taste, sturdy songwriting skills, and the status to hire the very best studio musicians, not to mention having Jakob Dylan drop in for a duo on “See You in the Spring.” Perhaps the results are predictable, but they are satisfying, and it’s better to have new music from this duo than none at all.